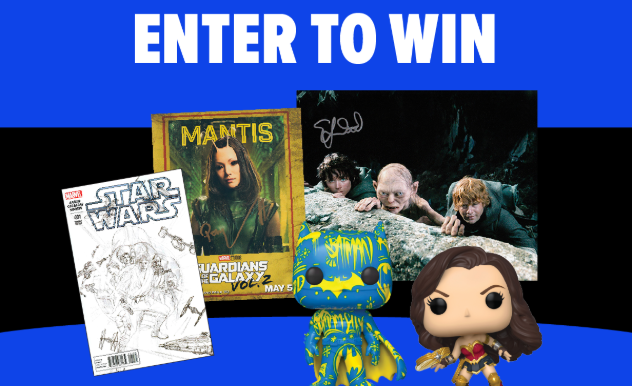 NO PURCHASE OR PAYMENT OF ANY KIND IS NECESSARY TO ENTER OR WIN. A PURCHASE WILL NOT INCREASE YOUR CHANCES OF WINNING.

ELIGIBILITY: The Contest is open to residents of The United States of America and Canada (with the exception of Quebec) who have reached the age of majority in their state, province, or territory of residence as of the start of the Entry Period (“Entry Period” runs from Wednesday, November 2, 2022 at 11:00 AM ET to Wednesday, May 31, 2023 at 11:59 PM ET). Employees, directors, officers, agents and other representatives (and those living in the same household of same) of Informa Pop Culture Ltd. and KNECT365 US (the “Sponsor”) are not eligible to enter or win. The Contest is subject to all applicable federal, provincial, and local laws and regulations. VOID IN QUEBEC AND WHERE PROHIBITED BY LAW.

ENTRY REQUIREMENTS: One set entry per person. Entrants must complete the required entry form in order to qualify.

Limit of one entry per person/per account during the Entry Period will be accepted. Entries must be received by Wednesday, May 31, 2023 at 11:59 PM ET. Potential winner will be selected by random draw in Toronto, ON at 9:00 AM ET on Thursday, June 1, 2023 and notified via email no later than Friday, June 2, 2023.

The potential winner will be notified via email and asked to correctly answer a mathematical skill-testing question before being declared the winner. Once the winner provides their personal information, they may also be contacted via email, direct message or phone at the Sponsor’s discretion. The winner’s name(s) and likeness may be used in future marketing and promotional materials (with written and/or verbal consent from the winner).

PRIZES: There is one (1) grand prize, consisting of:

Prize is non-transferable, with no cash redemptions, equivalents or substitutions except at Sponsor's sole and absolute discretion. All prize details not specified in these Official Rules will be determined in Sponsor's sole and absolute discretion. Prize details and availability are subject to change and prize provider's rules and restrictions, and in the event that Sponsor is unable to provide a winner with their prize, the Sponsor may elect to provide winner with the approximate value of such item in cash or award an alternate prize of comparable or greater value. The prize is awarded "AS IS" and without warranty of any kind, express or implied (including, without limitation, any implied warranty of merchantability or fitness for a particular purpose). Prize winner will be solely responsible for fees or costs associated with the prize they receive, regardless of whether it, in whole or in part, are used. Unclaimed prize will be forfeited.

ODDS: The odds of winning depend on the number of eligible entrants during the Entry Period.

Without limitation, the “Released Parties” consisting of Informa Pop Culture Ltd. and KNECT365 US and their respective officers, directors, employees, successors and assigns, will not be liable: for any technical malfunction or other problems relating to the network or lines, computer on-line systems, servers, access providers, computer equipment or software; for the failure of any entry to be received by the Sponsor for any reason including, but not limited to, technical problems or traffic congestion on the Internet or at any website or app; for printing or other errors appearing in these Official Rules or other Contest materials, misprints or errors in other Contest-related information, technical or mechanical malfunctions, or other problems or errors, whether caused by equipment, programming used in this Contest, processing errors, human errors or otherwise; or any combination of the above. Further, the Released Parties will not be liable for any injury or damage to an entrant’s or any other person’s computer or data contained therein, related to or resulting from participating or downloading any material in the Contest.

The Sponsor reserves the right to withdraw, suspend or amend this Contest or these Official Rules for any reason, including in the event that an error, technical problem, computer virus, bugs, tampering, unauthorized intervention, fraud, technical failure or any other cause beyond the reasonable control of the Sponsor interferes with the proper conduct of the Contest as contemplated by these Official Rules. In the event of termination, Sponsor will award the Prize as deemed fair and equitable, by the Sponsor. All issues and questions concerning the construction, validity, interpretation and enforceability of these Official Rules, or the rights and obligations of entrants and Sponsor in connection with the Contest, shall be governed by, and construed in accordance with, the laws of the Province Ontario, Canada.

RELEASE AND INDEMNIFICATION: BY PARTICIPATING IN THIS CONTEST, ENTRANTS AGREE TO RELEASE, DISCHARGE AND HOLD THE RELEASED PARTIES HARMLESS FROM AND AGAINST ANY AND ALL ACTIONS, CAUSES OF ACTION, CLAIMS, COSTS AND PAYMENTS FOR DAMAGES, LOSS, INJURY, OR DEATH, HOWEVER OCCURRING, IN WHOLE OR IN PART, DIRECTLY OR INDIRECTLY, AS A RESULT OF PARTICIPATING IN THE CONTEST OR ANY CONTEST-RELATED ACTIVITY OR RESULTING FROM ACCEPTANCE, USE, OR MISUSE OF, OR PARTICIPATION IN, THE PRIZE.

PRIVACY: Information submitted in connection with the Contest will be treated in accordance with these Official Rules and Sponsor’s Privacy Policy (as amended from time to time), currently available at https://www.informa.com/privacy-policy/; provided, that in the event of any conflict between these Official Rules and such Privacy Policy, the terms and conditions of the Official Rules shall prevail. By entering the Contest, entrant agrees that Sponsor may share entrant’s personal information with the prize provider for the purpose of Prize fulfilment in the event entrant is chosen as a potential winner.

This Contest is in no way sponsored, endorsed or administered by, or associated with any email provider. By participating in this Contest, you are acknowledging that you are providing your information to the Sponsor and not to any email provider. The information you provide will only be used to administer the Contest in accordance with the Sponsor’s privacy policy. All applicable email providers are completely released of all liability by each entrant in this Contest. Any questions, comments or complaints regarding the Contest must be directed to the Sponsor.