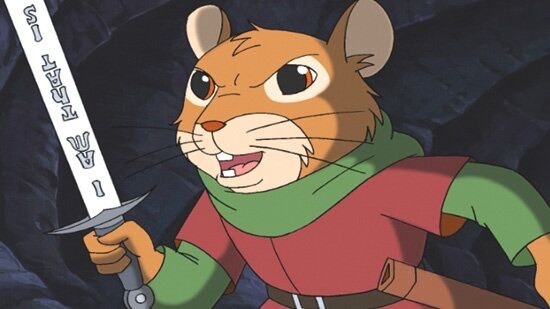 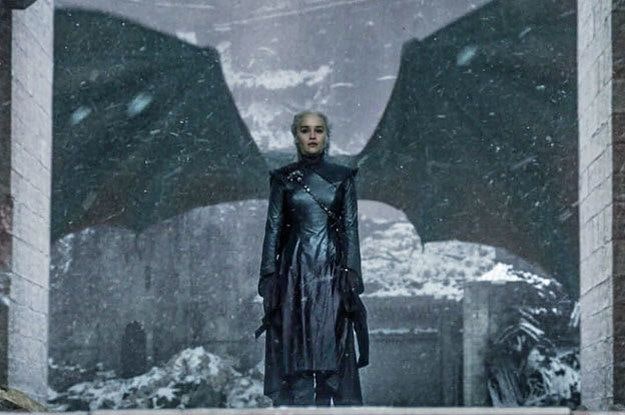 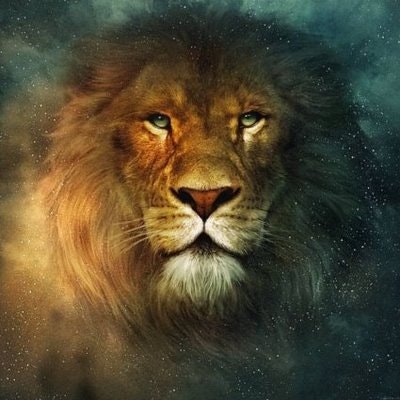 Although holiday celebrations are largely off the agenda this year, I’ll still be able to enjoy one of my favorite holiday traditions: curling up with an epic high fantasy book. Maybe it’s just me, but there’s something about the holiday season. I love the excitement in the air, the long winter nights, and the end of one year and the beginning of another that goes hand in hand with stories of magical lands, spells, and fantastical creatures. So once the lights are strung and the gifts are wrapped, I dive into some well-loved, well-thumbed pages. Ideally, I’d do this while indulging in one of my other favorite holiday traditions: food.

From J.R. Tolkien to George R.R Martin, Brian Jaques to C.S Lewis, fantasy and food are always a perfect combination.  But what about those magic potions, enchanted sweets, and food and drink offerings to gods and spirits that are such a staple in high fantasy? Yup, your favorite fantasy author might have been drawing on some real-world inspiration there too.

From placating nefarious spirits with sweets to predicting the future via cake, the end of the year is not only a time to indulge in great feasts but also when humans have turned to food and drink for magical reasons as well.

I Know You Are Here To Cause Mayhem…But Would You Consider A Snack Instead?

Folkloric tradition is full of mischievous spirits who are out to cause chaos in the form of anything from turning objects upside down to disembowelment. A common way for humans to stay on their good side was through a ritual food or drink offering. Take, for example, the Scandinavian Nisse. These small creatures look a bit like garden gnomes crossed with Santa’s elves with their tall conical caps and beards. According to tradition, Nisse is the guardians of farmsteads, taking care of the barns, assisting in chores, and protecting the family and livestock from evil. They are also notoriously easy to offend. Bad manners, the mistreatment of farm animals, or even spilling something on the floor without warning was enough to get on their bad side. An upset Nisse was prone to causing mayhem by playing tricks around the farm instead of helping. To stop the Nisse from running rampant, farmers would offer them gifts of food. One especially important gift was a bowl of porridge given on Christmas Eve with a pat of butter served on top.

In Austria, your holiday celebrations might be interrupted by a visit from goddess/witch, Frau Perchta. Perchta could appear to you in either of her two forms; that of a beautiful woman (if you had pleased her) or of a haggard old witch (if you had not). She is said to roam the countryside and enter homes during the twelve days of Christmas. If the inhabitants had worked hard and been well-behaved all year, Perchta would leave behind a silver coin. If they hadn’t well… Perchta would remove their guts and replace them with the straw and pebbles.

It’s no wonder that people try to stay on her good side. One way to do that is to strictly observe Perchta’s night on January 6th by eating a traditional meal and cakes baked in her honour. 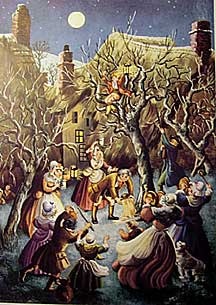 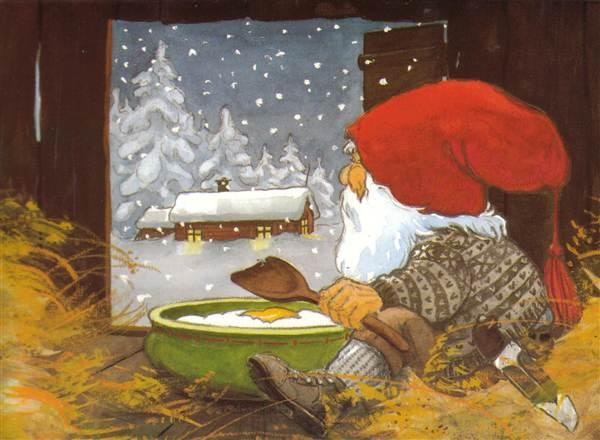 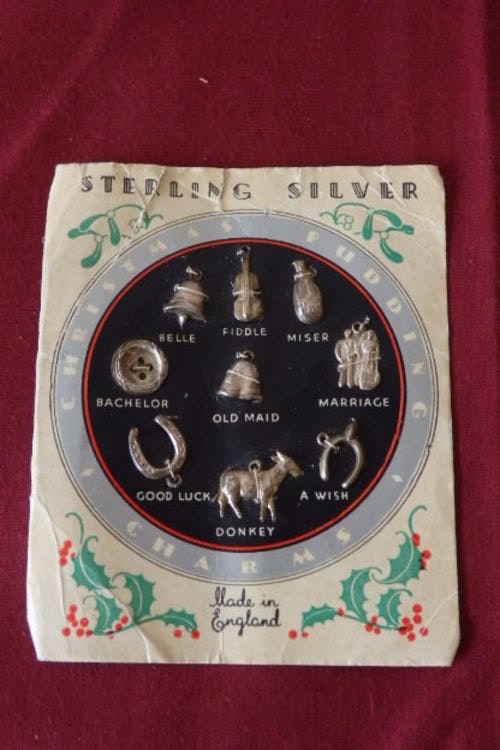 Pour One Out For Our Leafy Brethren... Literally

Wassailing is an English tradition that dates back to the middle ages.  The word “wassail” comes from the Middle English “waes hael,” which in turn comes from the Anglo Saxon phrase, “Wæs þu hæl” meaning “be thou hale” or “be in good health.” So every season, villages would gather together and go door to door singing and offering a drink from the wassail bowl in exchange for gifts and food. Essentially, caroling meets Halloween with added alcohol. This practice was a way of wishing good fortune and good health on your neighbors. In the southwest of England, where most of the country’s cider is produced, wassailing took on a slightly more ritualistic form. There it was common to wassail not only your neighbors but also your apple trees.

Large processions would make their way into orchards with the traditional wassail bowl and move through the trees. Bread and pieces of toast that had been soaked in the bowl were sometimes tied to branches or laid at the roots (turns out the Reddit meme of bread stapled to trees is just honoring a centuries-old tradition). People danced and made noise to chase away bad spirits and, most importantly, the contents of the wassail bowl were poured over the roots of the trees.  This tradition of imbibing apple trees with cider during the winter was thought to wake the trees up and, by showering them with the (literal) fruits of their labor, ensure a good harvest the following Fall.  And let’s be honest, who hasn’t used food and drink as a motivator at some point?

Ever Had A Piece Of Cake So Good You Could See The Future?

Let’s stick with England for a minute and its most quintessential holiday dessert, the Christmas or plum pudding. For North Americans, “pudding” tends to conjure up images of Jello but a plum pudding is actually more cake-like in texture. There are also a couple of fun fortune-telling traditions that evolved around this particular food.

The first happened during the making of the pudding itself. Tradition dictates that this should happen on “Stir Up Sunday,” or the last Sunday in the Christian Advent Calendar. Stirring up the pudding was a family affair. Each member of the household took a turn stirring the pudding (Clockwise only. Counter-clockwise was a big no-no). While they were stirring, family members made a wish that they hoped would come true in the next year.

Along with wishing, small charms were baked into the pudding to represent possible futures. When it came time to eat, whatever charm you discovered in your slice represented your fortune. Charms could vary from household to household but some standards included:

A Coin: You are going to come into money.

Ring or Bell: You are going to get married.

Thimble/Button: You are going to be single (um, ouch).

Horseshoe: You are going to have good luck.

Wishbone: Your wish will be granted.

Anchor: You are going to be safe throughout the coming year.

The Brits weren’t the only ones to use food to predict their fortunes in the coming new year. In Japan, it’s common to eat Soba noodles on New Year’s Eve. The longer the noodle the better and if you can prepare it without breaking it you will have good luck for the year. In Mexico and Spain, grapes are eaten at midnight, with one grape per chime of the clock to bring good luck to each month of the year. Beans are also a popular food in the South as they are thought to represent wealth and prosperity.

While I’ve narrowed my focus to Christmas in the West here, there are so many amazing traditions surrounding food all over the world and take place throughout the year. The kitchen really is a magical place.

Whatever you are celebrating, may it be happy and safe!