A Deep Dive into the World of Mortis

It’s been over 10 years since arguably one of The Clone Wars’ best episode arcs premiered: Mortis. This third season arc consists of three episodes, ‘Overlords’, ‘Alter of Mortis’, and ‘Ghosts of Mortis’. At its forefront we find Anakin, Obi-Wan, and Ahsoka drawn to a distant planet on a detour as they seek out the origin of a mysterious distress signal. In a season filled with Mandalore politics, Jar Jar, and rescue missions, this arc and its deeper story-telling can really take viewers by surprise. As you’ll come to see, Mortis has a lot going on; and I often hear people have a few questions about it by the end of the arc. Hop in the nearest Jedi shuttle and take an adventure with me as I try to better explain the origins of the Force: Mortis. 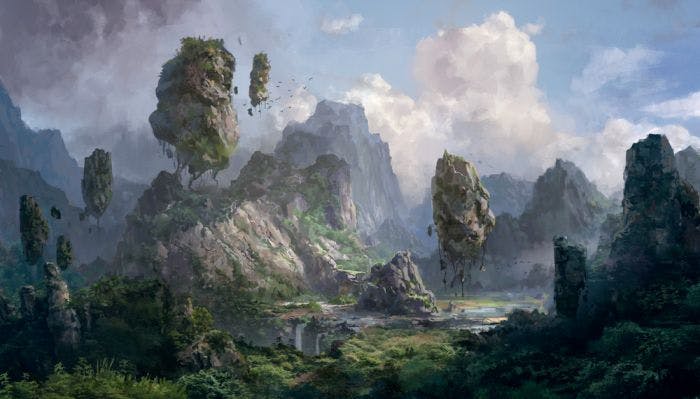 In the beginning, we see Mortis just as we see Naboo or Tatooine, a regular planet. As our beloved trio soon finds this couldn’t be further from the truth. The best way to describe Mortis is dream-like; the beautiful lavish planet is constantly moving, with everything on its surface in a state of continuous transformation. Our Galaxy-exploring friends haven’t seen anything like this before, so that should tell you something. With floating mountains (*cough* Avatar *cough*), dense forests, molten caverns, and seasons that change with the time of day, this planet is one of the most gorgeous and intriguing places that you’ll find in Star Wars – until nightfall.

As darkness sweeps the land, all the plants & trees quickly die. The scathing winds & rain take over. Without shelter, you surely couldn’t survive the night. A once inviting and hospitable daytime turns into an unforgiving night with very little warning.

That’s the tricky part – no one really knows. It’s believed that Mortis exists outside of space and time. Our heroes were on a mission in the Chrelythiumn system (Wild Space) when they saw the opening of the entry to Mortis. The strange thing is, Captain Rex was also in the same place at the same time, and saw nothing, not even our trio. Suddenly, Anakin, Obi-Wan, and Ahsoka awake on their shuttle after somehow safely landing on Mortis. Anakin was asleep – he didn’t land their ship. The team even check their scanners and can’t pinpoint where in the Galaxy they are.

Once our trio are able to leave Mortis at the end of our arc, they arrive right back where they left, with no time having passed. It appears that the entire journey on Mortis was mere seconds to the rest of the Galaxy. We still don’t know exactly where (or when) Mortis exists. But we do know the beings who live(d) there… 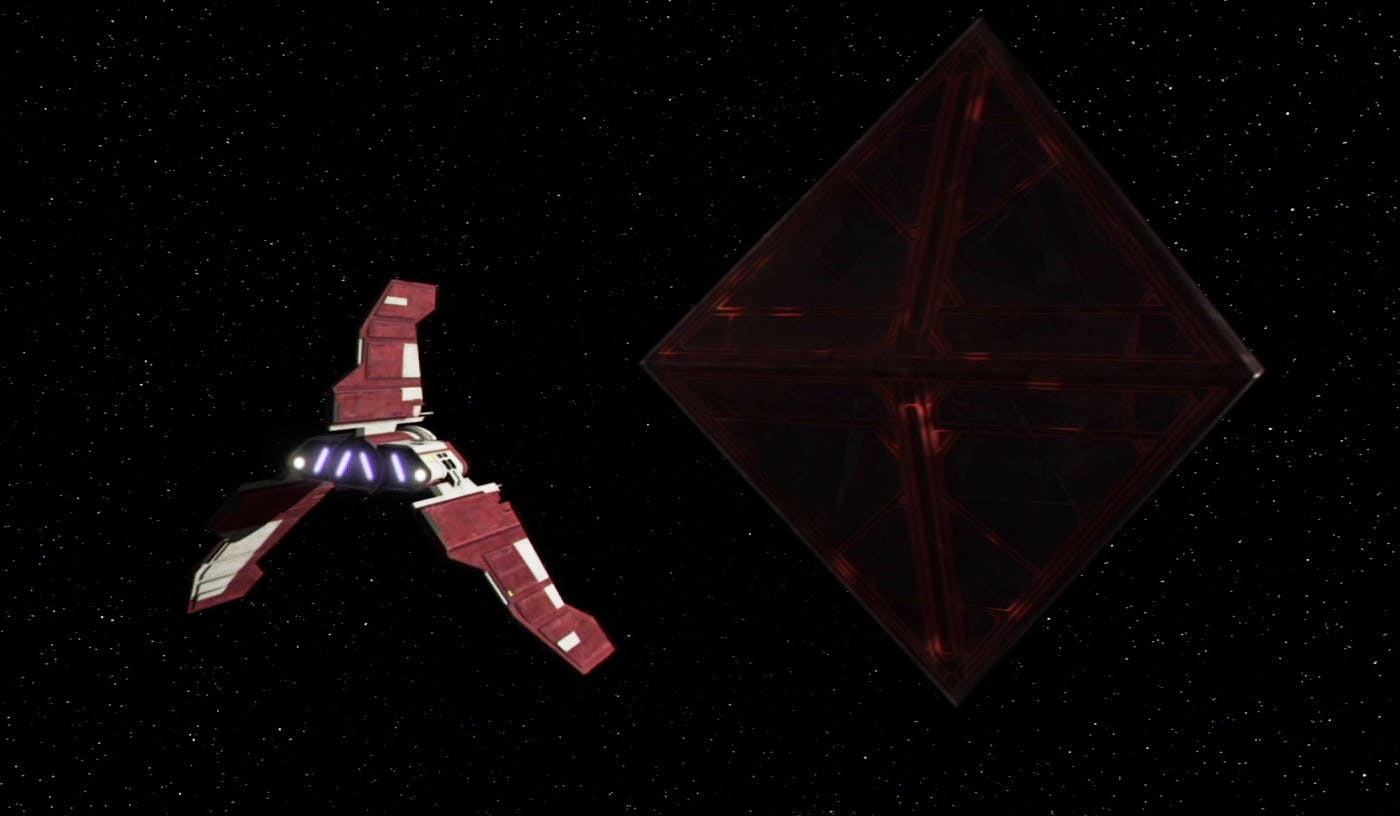 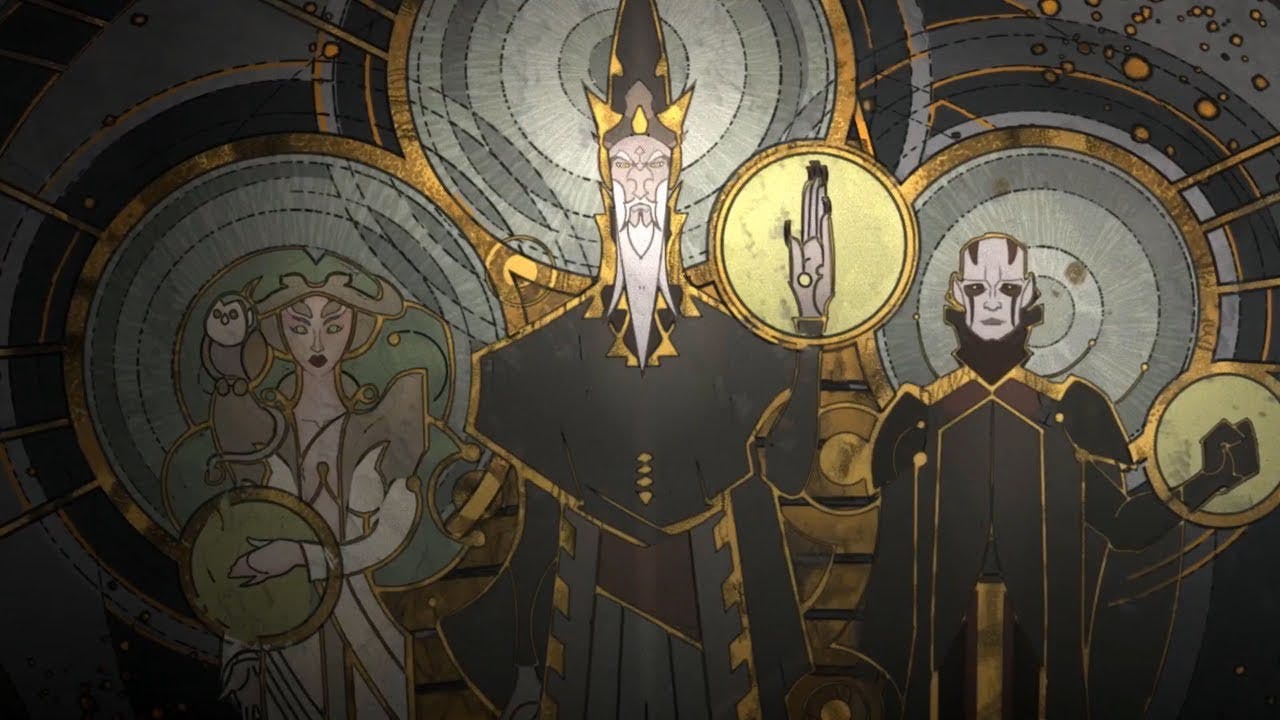 Who lives on Mortis?

Mortis is inhabited by three Force-wielding individuals, known only as The Father, The Daughter, and The Son. In the simplest of terms, the Son represents the bad associated with the Force: death and destruction. The Daughter represents all that is good: peace and creation. The Father serves as the balance between them, keeping the Force equally weighted on both sides. We come to learn that The Father and his children are such powerful Force-wielders that they can’t live in the material world any longer and retreated to Mortis long ago to live out their existence.

We also learn that The Father is nearing his end, and with it, the balance of The Force would no longer be maintained. Anakin was lured to this planet with the intention of having him take over the roll of balance-keeper from The Father. Ideally, The Father would die peacefully with Anakin staying on Mortis to watch over his children (kind of like an eternity-long babysitting gig). Anakin was selected as The Father believes, like many do, that Anakin is the long-foretold Chosen One.

Is Mortis the Force?

The reason for all the strange occurrences here? Many believe that Mortis is where The Force began. As a vision of Qui-Gon says to Obi-Wan, “[This planet is] unlike any other. A conduit through which the entire Force of the universe flows.” From the powers it possesses (environment changing, time stalling, etc) to its all-powerful Force-wielding inhabitants (see: below), and basically everything else about this planet, it seems more than likely that not only was The Force created on (or by) Mortis, but Mortis continues to serve as an important part of The Force throughout the Galaxy. 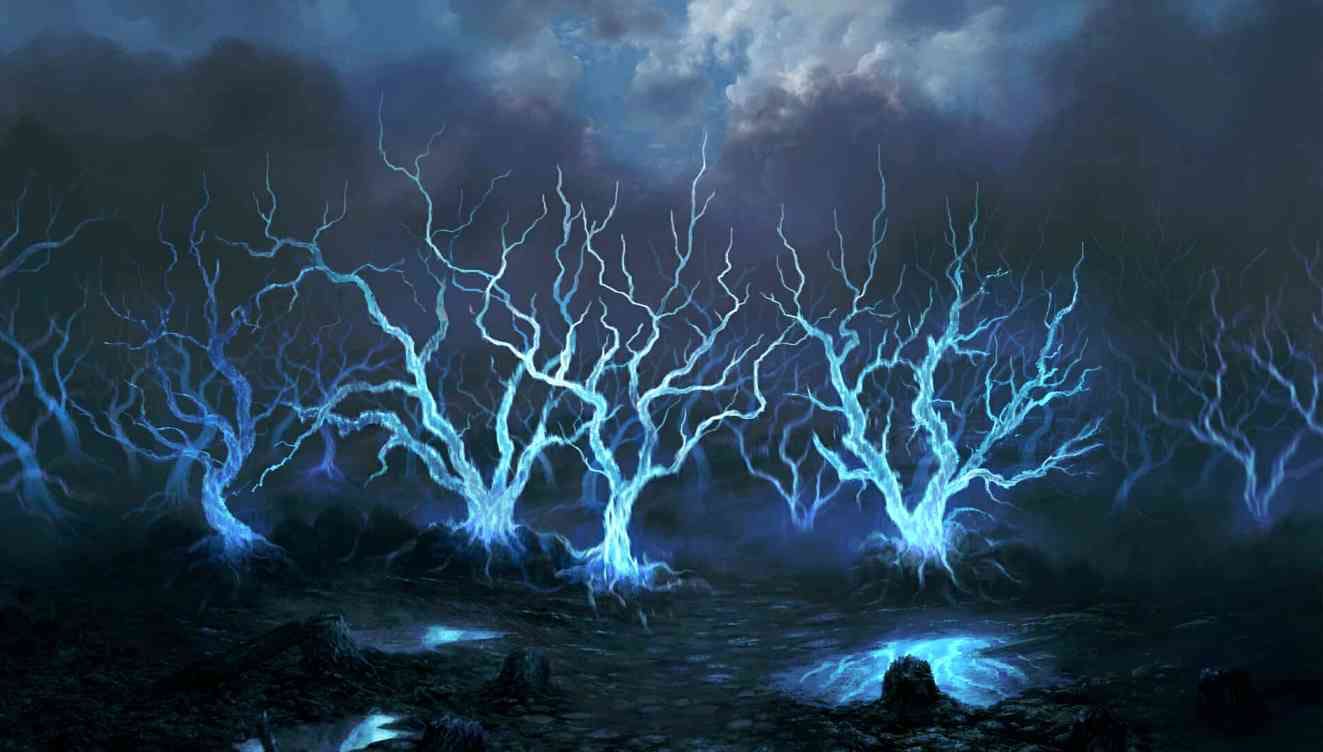 What are the best parts of the arc?

Aside from the gorgeous visuals throughout this arc – both in nature and in character animation – Mortis has some of my all-time favorite parts of The Clone Wars. Let’s go through them: 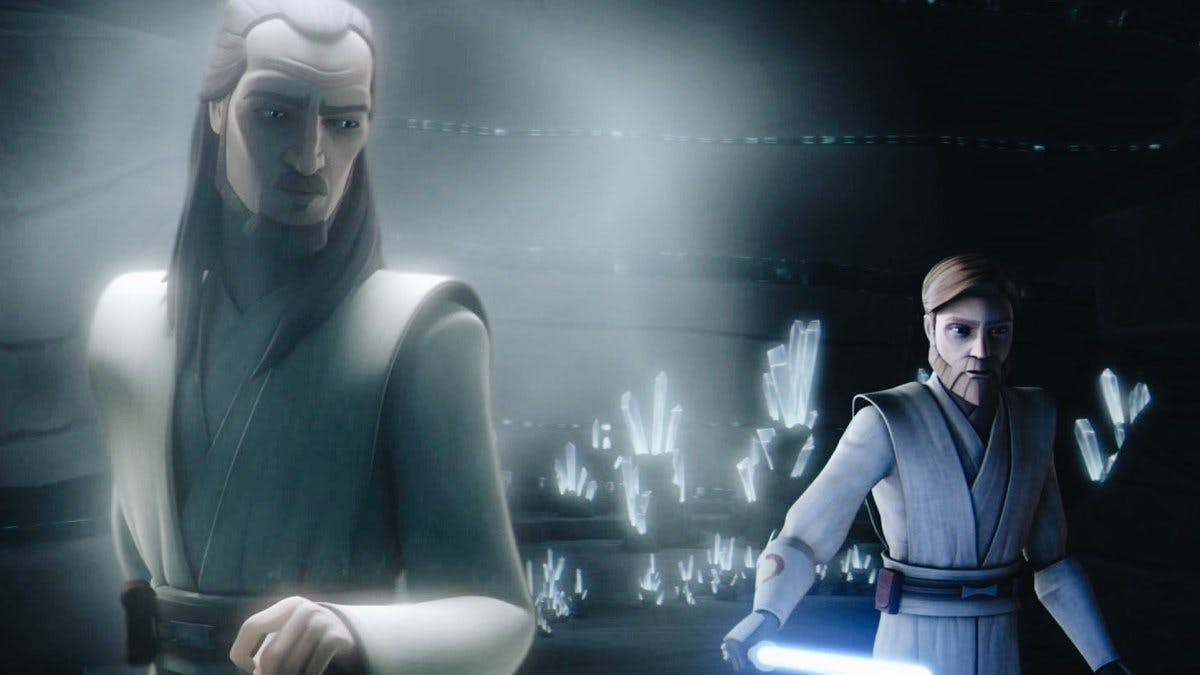 In an absolutely mind-boggling cameo for a kid’s TV show, Liam Neeson returns to voice his ill-fated Jedi Master, Qui-Gon Jinn. With the Force being so powerful on Mortis, Qui-Gon appears to Obi-Wan Kenobi to warn him of what Mortis is and the plans for Anakin. While his appearance isn’t long, its impact cannot be overstated. We haven’t seen Qui-Gon since Darth Maul murdered him in Episode 1, so this was a real treat for any Star Wars fan.

As Anakin explores more of what Mortis and its inhabitants have to offer, he temporarily sides with The Son. Why would he do that? The Son showed Anakin visions of the future: including a duel against Darth Sidious, the death of the Jedi, betrayal on Mustafar, and the destruction of Alderaan. Right after the visions, and as Anakin lets out a guttural scream, we hear the Vader theme play and briefly see the Vader mask in the smoke. Between the audio clips from the movies, to the obvious Vader cues, this scene is filled with pure nerdy perfection. 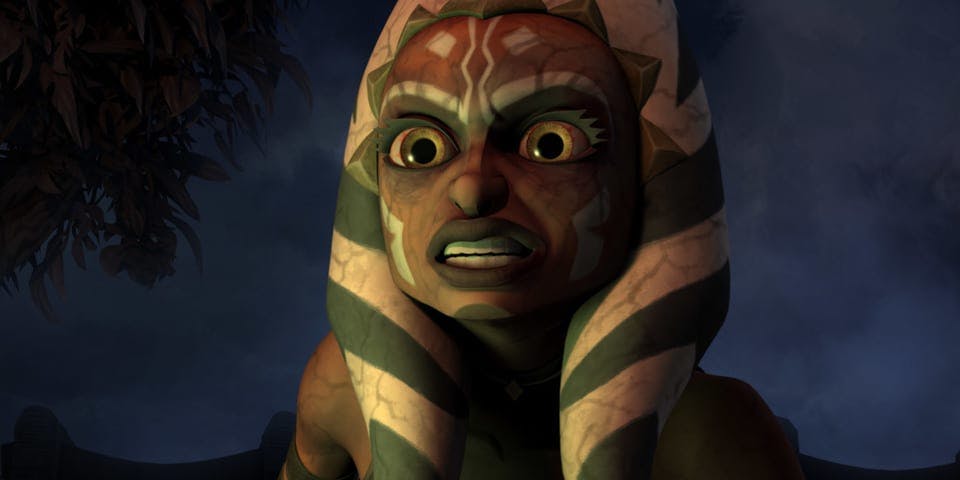 At one point, Anakin & Obi-Wan arrive to rescue a kidnapped Ahsoka, only to find she’s been placed under The Son’s evil spell. Ahsoka, now repping the yellow Sith eyes, battles the Jedi and even criticizes Anakin’s nickname for her. She tells Anakin he must either join The Son… or kill her. In a shocking twist, The Son intentionally kills Ahsoka and accidently kills The Daughter. Just before death, The Daughter has Anakin transfer her remaining life force into Ahsoka and revive her! You didn’t think she’d stay dead did you? Plot armor at its finest.

May the Force (aka Mortis) Be with You