From Ghostbusters and Back to the Future to the Indiana Jones series along with science fiction/ adventure -- the 80s had lots of  films to love. But another popular trend in family entertainment during the campy 80s was dark fantasy films. They were all full of magic but they also dealt with sacrifice, death, and other darker themes that through today’s eyes look outrageous. The philosophy behind these productions was that kids were fine dealing with stories that tackled their fears and perception. But all of that was bulldozed in the early 90s with Disney’s renaissance and the boom of digital special effects. Take a look at some hit fantasy movies from the 80s that we think deserve more praise. 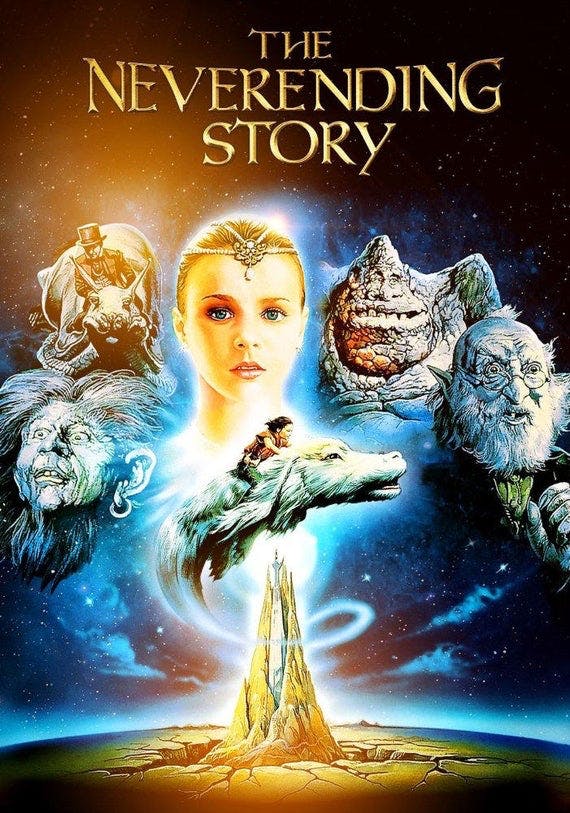 Did you know this is a German film? For many years, Dustin Henderson’s (Stranger Things) fav film held the record for the most expensive movie ever made outside of the US or the Soviet Union. Based on the German book by Michael Ende, the film tells the story of what happens once 10-year-old Bastian Balthazar Bux (the book’s chapters are structured by the alphabet and that plays into the character’s names) gets his hands on the eponymous book. What ensues is an odyssey where reality and fiction start to melt into a quasi-philosophical story about the power of imagination.

Even though the film only covers the first half of the book, The NeverEnding Story has a perfectly rounded plot that touches on themes such as bullying, abandonment, loneliness, and death that still resonate after almost 30 years. Give it another look and pay attention to the wonderful special effects, production design, and exquisite treatment of each character’s development and let us know if you think you should be talking more about this inspiring and exciting classic. 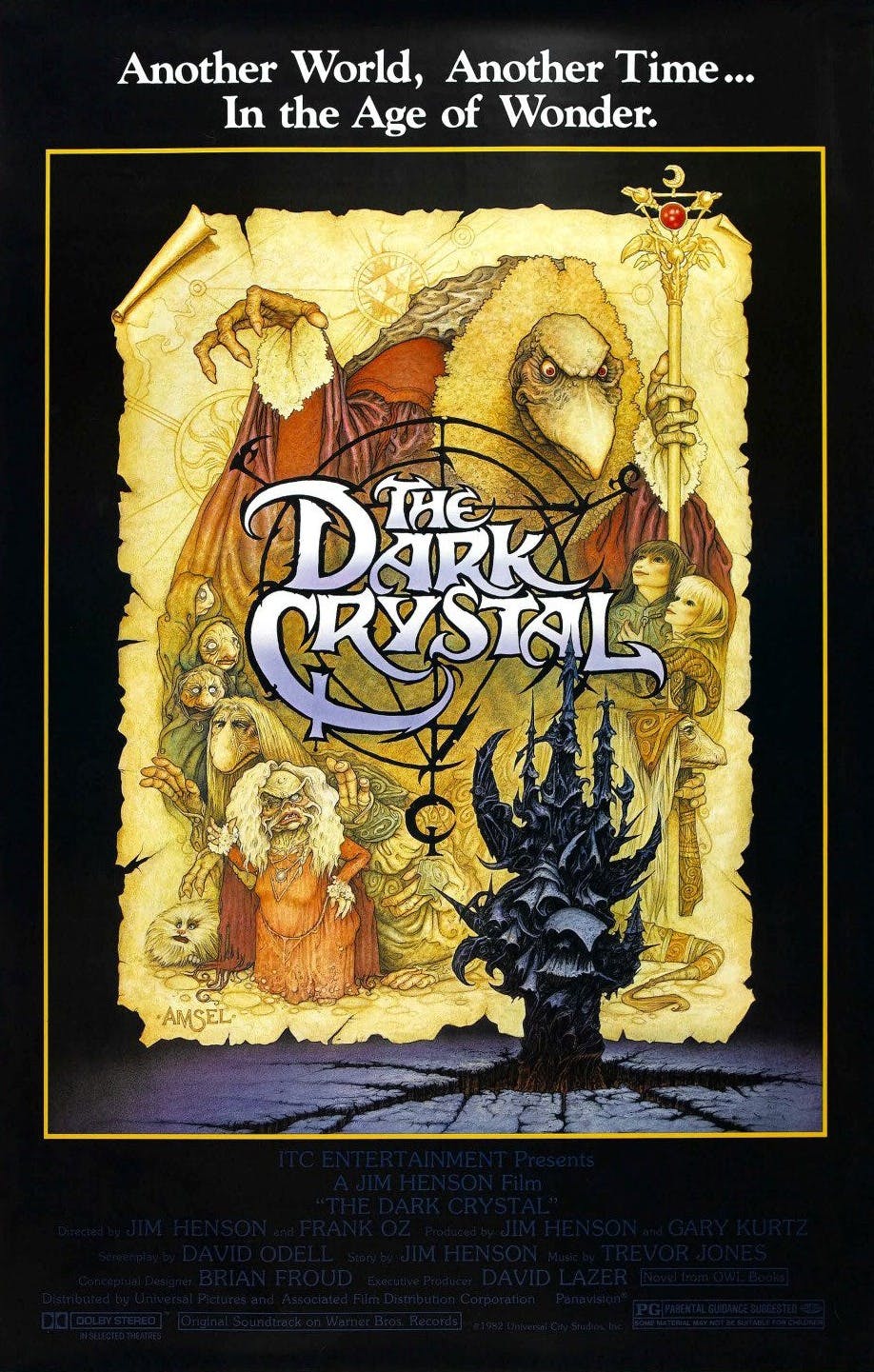 This film was released between its more popular cousins, The Muppets Show and Labyrinth. Not to mention, without the power of a Kermit the Frog or a David Bowie to support it. Yet, despite being under the radar, The Dark Crystal is the most complex of all of Jim Henson’s productions.

Based on an original idea by Henson (the Walt Disney of puppetry), the film hides its main theme — that there’s a good-spiritual and a not-so-good materialistic and egocentric side in all of us that needs to be kept in balance —behind an epic, coming-of-age adventure. Jen, a young member of the oppressed and slaughtered race known as Gelflings, is forced to embark on a quest to fix the wrongs (and a magic crystal) in a world that’s about to give up on hope and happiness. The film, which only uses puppets as characters, is as intense as it sounds but it’s also a beautiful exercise on craftsmanship and world-building before the latter was a thing. The Dark Crystal will leave you delighted and touched, while also offering a beautiful perspective on what it means to be complete as a human being. Transcendental. 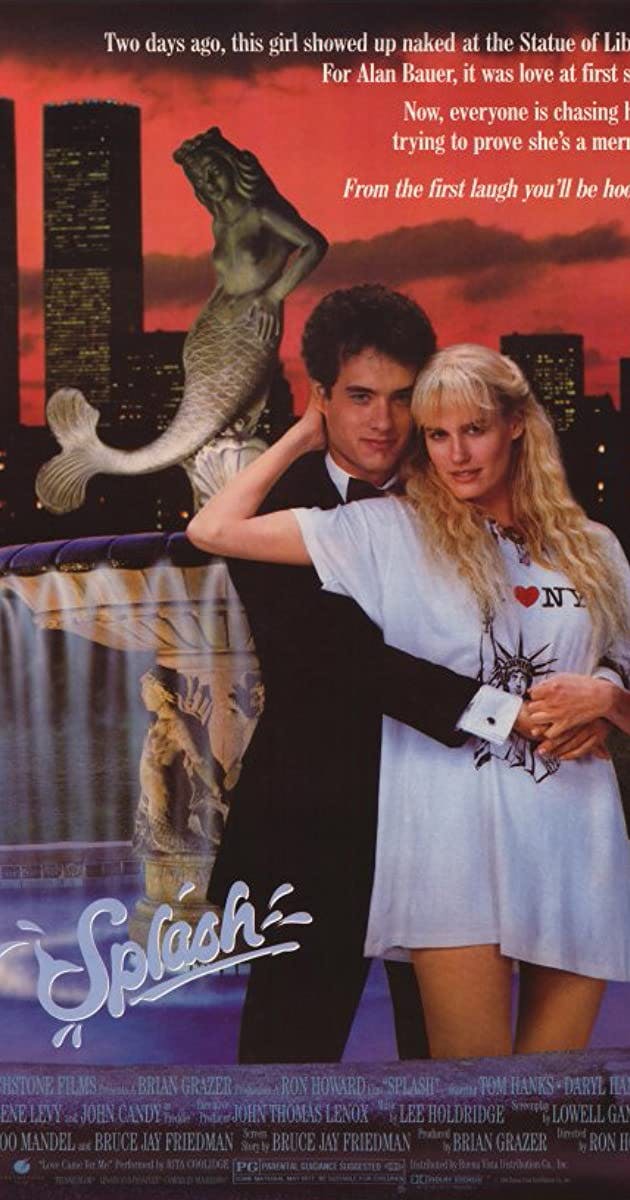 In the early 1980s, the Walt Disney company was on the verge of bankruptcy and becoming irrelevant. The company was still trying to find its way after the death of its founder almost twenty years earlier. The creative head of the company at the time was Walt’s son-in-law, Ron W. Miller, who was keen on experimenting with new technologies and themes while trying to push the brand into new story-telling territory not necessarily fitting to Disney’s family-friendly brand. He pushed for projects such as the now cult film, Tron and Tim Burton’s stop motion shorts, with almost no success whatsoever. So, instead of giving up, he founded a new film distribution arm, Touchstone Pictures, that would help him release titles he believed in and that wasn’t necessarily for kids. Splash was Touchstone’s first release. Let’s just say that without Splash, Walt Disney might not even have existed today.

A poster of 80s stardom, Splash marked big breaks for everyone involved and gave Disney enough money to support what would become the company’s renaissance. The film was Tom Hanks’ first film role, Ron Howard’s first successful film as a director; Darryl Hannah became the IT girl of the moment and John Candy and Eugene Levy became the most sought-after supporting comedians of the decade. The movie, which even got an Oscar nomination for Best Screenplay, is still highly enjoyable in its zany but classical theme of love between mythical creatures and humans. Its special effects are still impressive, especially the mermaid’s tail. Dive into this film without holding your breath. You’ll be refreshed. 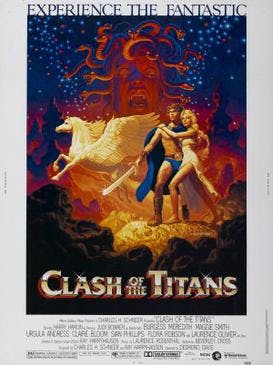 This is a film that was already a nostalgia trip when it was released. A throwback to adventure films that for more than 30 years had portrayed a myriad of creatures created by the revolutionary special effects and stop-motion wizard Ray Harryhausen, this British-American co-production was a surprise hit. Most of the surprise factor came from the fact that producers weren’t sure if family audiences of the 80s would still be open to watching stop motion after the evolution of special effects in films such as Superman (1978) and Star Wars (1977). But not only were audiences open to seeing the wonders that Harryhausen was able to create one more time (this was his last film), they embraced it.

The film is based on the classic Greek myth of Perseus, played by 80s heartthrob Harry Hamlin, and his encounters with gods and monsters. Fun Fact: Harryhausen’s Medusa is still the standard representation of the monster in pop culture. From the films in this list, this one has probably the least sophisticated screenplay with an ending feels especially anticlimactic. However, everything else just pops out of the screen. Grab your shield and fly with Pegasus to the wonderful world of Harryhausen’s imagination.