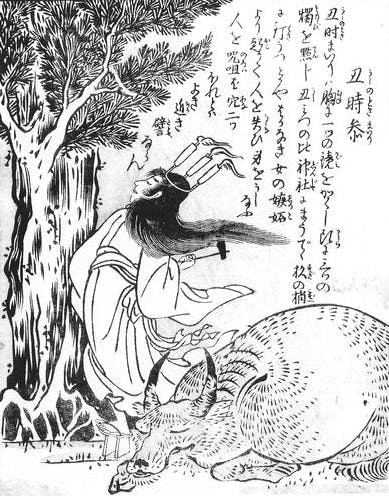 I Put A Spell on You: Three ways humans bothered each other in the past.

From Tiger Kings to Weeping Monks, Netflix is keeping us entertained in 2020. With the arrival of the live-action adaptation of Thomas Wheeler and Frank Miller’s Cursed on the streaming platform this month, we’ve been immersed in all things dark and magical. So in honour of Cursed this month, Factually Obscure is looking at three historical curses from around the world.

Full disclaimer, this is for educational and entertainment purposes only, guys. Please don’t go trying this at home. Seriously. Stick to writing passive-aggressive social media posts like the rest of us.

When it comes to magical curses, who hasn’t thought of tombs, mummies, and vengeful pharaohs? While Ancient Egypt was no stranger to using magic to help with anything from healing to promoting the growth of crops, full out curses written in tombs were rare. Instead, it’s much more common to find “warnings.”  As one Egyptologist puts it, we don’t consider “no trespassing” signs curses, so warnings in tombs should be considered in the same way. Tomb warnings were written in a way that closely resembles ancient Egyptian legal texts, with each negative action being given an appropriate punishment. Many warnings were very specific as to the punishment (100 lashes, not being able to go to the afterlife, etc) but one significant example comes from the tomb of Penniut in Aniba. Penniut decided to go with the “choose your own adventure” approach, simply warning that persons disturbing his tomb would be “miserable”. It’s left up to the individual reader to imagine what that misery might entail (for me, it’s eating nothing but turnips for the rest of my life. Yuck).

If the Egyptians did want to rain on someone else’s parade, they were far more likely to go about it by using something called an Execration Text. The names of enemies were listed in these texts that were inscribed on statues, bowls, or blocks of clay or stone. These items were then deliberately destroyed by smashing, cutting, stomping on, etc. The broken pieces were then buried near tomb or ritual sites. Even if the curse didn’t take effect, the breaking part must have been at least a little bit satisfying.

In Japan, the curse laying ritual, ‘Ushi no toki mairi’ is thought to have been developed during the Edo Period (1603-1868) and is known for being elaborate. First, the curse had to be laid between the hours of one to three am; which are the traditional hours of the Ox. The curse layer dresses in white and wears a distinctive crown of iron with three lit candles set in it. For at least seven nights in a row, they had to hammer nails into a sacred tree at a Shinto shrine. This must be done entirely in secret as any witnesses will break the spell.

Variations on this ritual appear in other texts and tales. Sometimes the tree is replaced by a straw doll or the curse layer holds a comb or torch of bamboo in their teeth. What does remain constant is that it is typically a woman who can wield this power -- yeah, yeah there’s a “hell hath no fury” joke in there, but it’s 2020 guys, c’mon.

The medieval west is the birthplace of the Arthurian myth and many interesting rituals. One of the most common ones was the ‘hexfoil.’ A hexfoil is a compass-like drawing, made up of a series of curved lines inside a circle (imagine a flower shape and you’re not far off). Complete hexfoils were protective symbols. It was thought that demons or other evil, attracted by the design, would begin to follow the lines of the hexfoil, ultimately trapping themselves in the circular path forever. They were meant to protect the person who had drawn it or the thing on which it was inscribed.

To invite misfortune then, was a simple thing – by inscribing an incomplete hexfoil, one with a “petal” missing or by deliberately damaging a previously drawn hexfoil, gave evil the chance to escape the design.

Interestingly, one of the most common places to find medieval hexfoils is in churches. They are often scrawled by early worshippers on walls and under the pews. Far from attempting to cover the marks up, this early graffiti was accepted and respected by the church. Complete hexfoils sometimes even appear in official church architecture, such as along baptismal fonts, where historians believe they were meant to provide protection for babies.

Breaking pots, nailing trees, and drawing circles; these are just three examples of the fascinating history of humans finding ways to curse other humans. Who knows, maybe in a hundred years or so, historians will be adding “signing people up for spam email” or “deliberately messing with Netflix recommendations” to that list.